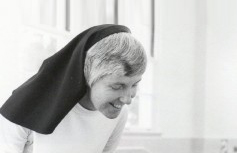 Sister Marianna Harrison, a Dominican Sister of San Rafael for 59 years, died peacefully at Our Lady of Lourdes Convent on December 5 at the age of 84.

Joan Catherine Harrison was born in Cleveland, Ohio and was raised with her siblings in Brooklyn, New York. After graduation from Mercyhurst College with a B.A. in English, Joan traveled to Europe before beginning a year of teaching second grade in Brooklyn.

Joan chose to enter a convent on the West Coast when her family planned to relocate to California, and took the name Sister Marianna. She ministered in education for twenty-one years at the elementary and high school levels at Catholic schools in Vallejo, San Rafael, Reno, Los Angeles, San Anselmo, and Napa.

In 1982 Sister Marianna studied for and received her Clinical Pastoral Education certification. After caring for her father in the last years of his life, she served at St. Philip Parish in San Francisco, ministering to the sick and aging for eight years. In addition to bringing Eucharist and sharing prayers, Sister Marianna took seniors to their medical appointments, to picnics, ball games, movies and plays, museums and the zoo as they were able and interested. She had a particular gift of presence with the elderly. Sister Marianna returned to Reno in 1993 to serve as a chaplain at St. Mary’s Regional Medical Center for nine years.

With seemingly inexhaustible energy, Sister Marianna enjoyed many hobbies, including opera, gardening, backpacking, and travel. She and Sister Bernice Garcia co-chaired the committee that planned the Dominican Convent Centennial celebration that took place in 1989. She retired to Our Lady of Lourdes Convent in 2005. In the last years of her life, staff who cared for her remarked upon her ever-present smile. 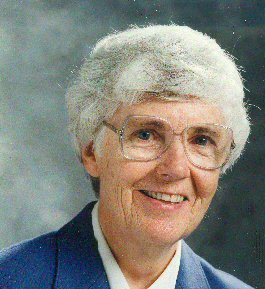 Sister Marianna is survived by her sister, Madeline McNulty (Jerry) and her brother, Bob Harrison (Sheila), many nieces and nephews, grandnieces and grandnephews, and by her Dominican Sisters.

A funeral Mass will take place on Friday, December 11 in the chapel at Our Lady of Lourdes Convent Avenue, 77 Locust Avenue, San Rafael. Burial will follow at St. Dominic Cemetery in Benicia.

Memorial gifts in honor of Sister Marianna may be made to Dominican Sisters of San Rafael, Development Office, 1520 Grand Avenue, San Rafael CA 94901.

Reflections by Sister Patricia Bruno offered during the Mass of Glory

Mary Oliver has a poem that I think embodies the feelings of Mary of Nazareth and the Ana the prophet in the gospel, as well as reveals our feelings today as we gather to remember and celebrate the life and resurrection of our dear sister Marianna.  Mary Oliver puts it this way.

We shake with joy, we shake with grief.
What a time they have, these two
housed as they are in the same body.

I don’t know if there’s an icon of Mary of Nazareth and Ana the prophet’s meeting in the temple, but perhaps we don’t need one because the story’s so vivid. It’s been seared into our minds and hearts.

Ana – night and day with fasting and prayer went to the temple expecting to see the face of the one she loved.  And it happened.  “Just at that moment,” scriptures says, the moment she had been waiting for, praying for, eagerly anticipating.  Two country people with a baby in their arms walked into the temple and her eyes were opened!  But how did she recognize Him?  Did she really expect the Messiah to be a baby?  Did she expect the Messiah to have poor parents – parents so poor they couldn’t afford anything more than two turtle doves?

Or had she learned, as we are learning, that God never arrives the way we expect?

Even though there are no words recorded between Ana and Mary, it’s easy to imagine the strong bond whether spoken or unspoken that drew them to each other.  And I’m sure they embraced each other and Ana opened her arms wide to receive the baby Mary was holding.  And I’m sure Ana held that baby so close to her breasts that their heartbeats became one.

Two very real women embracing each other, two very patient women holding in their arms a mystery  – a common secret–  as they looked into the eyes of God.  Blessed are they.

What a day that must have been in that temple – full of surprises.   A day filled with promise and joy, but also haunted by that sharp warning: a sword will pierce your own heart too.  Neither of these women understood the meaning of those words.  What would happen?  What kind of a sword?  Another mystery that only time would reveal.  It was a “Temple meeting” –  a meeting with God,  filled with mixed emotions.

We shake with joy,
We shake with grief.
What a time they have, these two
housed as they are in the same body.

Even though Ana doesn’t say anything in the gospel her actions speak louder than words.

Ana is more than a passing figure in scripture or even a holy 84 years old woman – the same age as Marianna.  But we don’t remember Ana or Marianna because of their age. We remember them for their faithfulness and wisdom.  We remember them for their tenacious trust in God.  The gospel says, Ana is a Daughter of Phanuel which isn’t the name of a tribe, but the place where Jacob met the stranger and wrestled all night long and named that place of struggle, engagement with the unknown, as the place where we met God face to face.   In other words, Daughters of Phanuel are women who stay in the struggle, who never abandon their search for God.  No matter what.  No matter what.

And it’s here that Marianna can join her two sisters, Ana and Mary of Nazareth because she continues the line of holy women.  For us Marianna is a living icon of this story.  Along with Mary the mother of Jesus and Ana the prophet Marianna was a woman of faith. A Daughter of Phanuel who said yes again and again as her life began to slip away.

Marianna, who cherished life and friendship; Marianna, one of the kindest sisters we could live with; Marianna, fun loving, hard working in her ministries, the most unlikely person whom we could have chosen as Dean of Girls as Justin  – Siena High School; Marianna, too loving, too kind, too forgiving.  Even then she knew the face of God.  She was feminine, graceful- and grace-filled.  People were more important to her than the strict observance of the law.

We shake with joy when we remember her life and her love of so many people especially her family and dear friends: Gloria, Bernice, Billie and Jeremy.  We shake with joy knowing her struggle and pain have ended.

And we shake with grief.  Her struggle was long and hard. Her daily slipping away was a sword that cut into our hearts.

What a time they have these two emotions, joy and grief, housed in our bodies.

Ana, Mary and Marianna: all Daughters of Phanuel: women who waited for their lives to unfold, waited for just that right moment when God’s presence was more real to them than the touch or voice of their loved ones.  All three Advent women – women of hope and women who help us name grace in our lives.

Grace: that waiting sharpens our attention;

That in the midst of darkness and doubt, aging and diminishment God waits with us.  We are not alone.

Grace; that through our love and kind actions we birth Christ in our world today.

That we who are in love with God will some day be wrapped in mystery, wrapped in love looking into the eyes of God as they are now.

And that how and when God’s Promise will be fulfilled in our lives is a mystery: beyond our understanding.

We shake with joy,
We shake with grief.
What a time they have, these two
housed as they are in the same body.