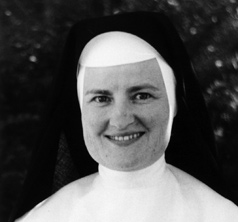 Sister Patricia Lyons, a Dominican Sister of San Rafael for 76 years, died peacefully at Our Lady of Lourdes Convent on December 24, 2015.

Patricia grew up an only child in Vallejo, California, where she attended St. Vincent’s grammar and high schools. She continued her education at Dominican College in San Rafael, where she majored in music. She also met and became great friends with Virginia de Lorimier. They both entered the convent in 1938 and became Sister George and Sister Patricia. Their friendship was a gift to them both and lasted until Sister George’s death in 1994.

Sister Patricia seemingly was destined to educate very young children. She began her teaching ministry with first grade at St. Raphael School in San Rafael. Living in one of the dormitories on the Dominican College campus allowed her to also experience older students, and led to her selection as the College’s Alumnae Director. Sister Patricia enjoyed that role for many years. 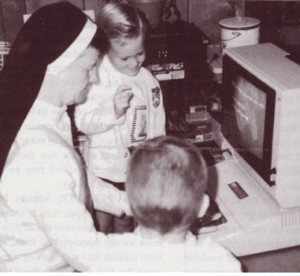 A true pioneer in education, in 1946 Sister Patricia founded and became principal of The Garden School, located on the first floor of Edgehill, one of the college residences, an elegant Queen Anne Victorian constructed in 1887. The Garden School became a beloved Marin County institution for generations of families with pre-school and kindergarten age children. Sister Patricia was a kind, loving teacher who also firmly insisted on good behavior in the classroom and on the playground. One of the school’s brochures explained, “We Read. We Write. We Think. We instill Love and Order. We Nurture a Strong Self-Image.”

When Edgehill was deemed not earthquake safe and closed in the 1980s, a small building with classrooms and a chapel was erected nearby. In 1996 there was a great celebration of the school’s 50th anniversary, and included a surprise gift to Sister Patricia of two tickets to Rome. Then Governor of California, Pete Wilson, sent a congratulatory letter, saying “You have touched the lives of three generations of Californians, providing each with a strong foundation with which they can meet the challenges of the future. You have inspired love and loyalty from your friends, colleagues, and numerous students, and you have bequeathed to Marin County, and all California schools, a legacy of academic excellence.” 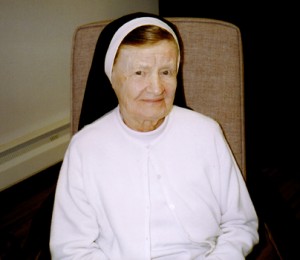 Sister Patricia received many awards for her dedication to early childhood development, including the Outstanding Teaching Award from the Marin Education Foundation in 1982; the Rotary Citizens Honoree in 1988; and Marin County’s Private Schoolmaster of the Year from the California Schoolmasters Club in 1996. The Dominican College Alumnae Association created the Sister Patricia Lyons Alumnae Award which is given annually to a distinguished graduate.

Sister Patricia is survived by her cousins, Cathleen Woodson and husband, Dan, Mark Berto and his wife, Ingrid, and Maryanne Swineheart and her husband, Gary, and by her Dominican Sisters.

A funeral Mass will take place on Tuesday, January 5 at 11:00 a.m. at St. Raphael Church, San Rafael. Following a reception with light refreshments at the Dominican Sisters Center, 1520 Grand Avenue, Sister Patricia will be buried at St. Dominic Cemetery in Benicia.

Memorial gifts in honor of Sister Patricia may be made to Dominican Sisters of San Rafael, Development Office, 1520 Grand Avenue, San Rafael CA 94901.