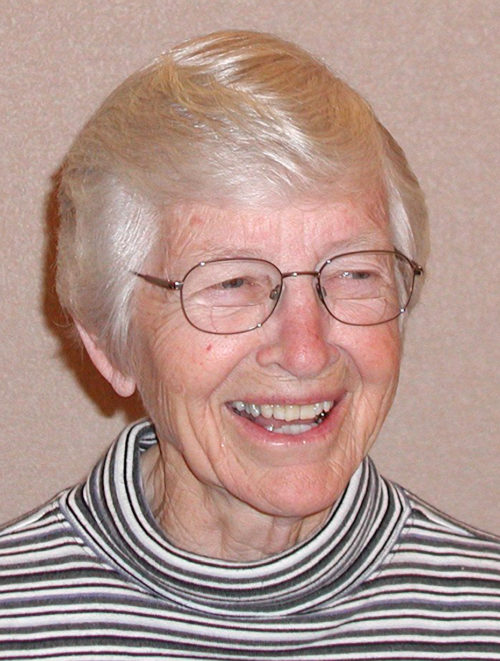 Sister Billie Olin, formerly Sister M. Dunstan, a Dominican Sister of San Rafael for sixty-five years, died peacefully on February 14 at Our Lady of Lourdes Convent in San Rafael after struggling with Lewy Body Dementia for nine years. She was talented in many areas, including sketching, printing and poetic reflections, but above all, she was a gifted teacher. Education was at the heart of her being.

Named by her grandfather, Billie was the third child of Henry and Zella Olin. She was born in October 1929 in Arbuckle, a rural community in Colusa County, California. Billie attended Pierce Joint Union High School in 1947; of the thirty-six graduates, she was one of three who went on to college. She chose Dominican College in San Rafael where a cousin had attended. Billie graduated in 1951 with a bachelor’s degree and a teaching credential. So began her long dedication to the education of young people.

After her first year of teaching in Colma, California, Billie entered the convent and became Sister Mary Dunstan. Her ministry as an educator took her to St. Vincent’s in Vallejo, St. Dominic’s in Benicia, Assumption in Stockton, Saint Helena in St. Helena, St. John Vianney in Rancho Cordova, Our Lady of Mercy in Daly City, St. Cyril’s in Oakland, St. Rose in Santa Rosa, St. John the Evangelist in Sacramento, and Holy Cross in West Sacramento. In some of the schools she served as principal, and in the early 1970s served as elementary school supervisor for the Dominican Sisters’ schools. She was universally regarded as a teacher who always saw the potential in each child and challenged them to be their best.

Sister Dunstan returned to her birth name when given the choice after Vatican II. She participated in a clinical pastoral education program and earned a certificate of gerontology at UC Berkeley. This enabled her to begin a new ministry with older adults at St. Mary Magdalen parish in Berkeley and St. Columba parish in Oakland, and after five years, at St. Gabriel parish in San Francisco.

Once retired from education, Sister Billie accepted the position of archivist for the congregation at the Dominican Sisters Center in San Rafael. She spent many happy and productive years organizing the historical documents and photographs that tell the long history of the Dominican Sisters of San Rafael. Of her many achievements as archivist, one was her vision and management of the oral history project, in which every living sister was interviewed and videotaped, telling her life story. Another was to receive and create a display for priceless 15th century chant books from Dominican University that had originally been given to the Sisters as a gift in the 1920s.

As Sister Billie’s health declined, she moved to Our Lady of Lourdes Convent, where she was an active part of the community as long as she was able.

Sister Billie is predeceased by her parents, her older sister who died at birth, and her brother, Douglas. She is survived by her nieces and nephews, Bruce Olin, Kelly Olin (Frank Cates) Steven Olin (Candie) Sally Sylva, Martha Olin, Julie Caselli (Jim) and grand nieces and nephews and by her Dominican Sisters.

The funeral Mass will take place on Friday, February 22, 2019 at 10:00 a.m. in the Gathering Space at Dominican Sisters Center, 1520 Grand Avenue in San Rafael.

Memorial gifts in honor of Sister Billie may be made to the Retirement Fund, Dominican Sisters of San Rafael, Development Office, 1520 Grand Avenue, San Rafael CA 94901.