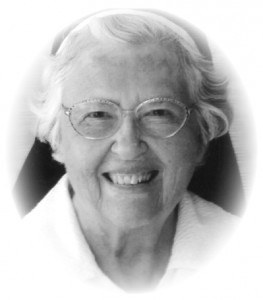 Sister Marie de Lourdes Bessac, a Dominican Sister of San Rafael for 67 years, died peacefully at Our Lady of Lourdes Convent in San Rafael on October 1, 2015. She had recently celebrated her 92nd birthday.

Marjorie Florence Bessac grew up in Riverbank, California. Her family were not Catholics; she attended public schools and was planning an undergraduate career at Stanford University until her mother saw photographs by Ansel Adams of Dominican College that were published in the San Francisco Chronicle. The decision was made, to the dismay of most of the family,  that Marjorie would go to Dominican. At first the transition to Catholic school was difficult for her, but after her freshman year her relatives’ worst fears and her deep happiness were realized: Marjorie became a Catholic in 1941 and entered the convent in 1946.

Sister Marie de Lourdes was a teacher from 1948 to 1959 at St. Rose Academy in San Francisco and at Santa Catalina School in Monterey, teaching French, history, religion and biology. The next thirty years were spent in the field of health care at St. Joseph’s Hospital in Stockton. There Sister Marie de Lourdes cared for the elderly sisters. She very much enjoyed her years in Stockton, and always found additional ways to serve others, becoming certified as a medical records transcriptionist.

In 1989 Sister Marie de Lourdes retired to the motherhouse in San Rafael; a year later, when the building burned, she and seven other sisters relocated temporarily to San Domenico Convent in San Anselmo. They returned in 1995 to a newly rebuilt Dominican Convent. Sister Marie de Lourdes, never one to be comfortable with idleness, volunteered at Our Lady of Lourdes Convent and almost always was knitting something beautiful.

Her health finally required her to move to Our Lady of Lourdes Convent in 2008 and to accept the care of others. Her greatest joy was keeping up, by telephone and mail, with a great number of friends.

Sister Marie de Lourdes is survived by her sister, Josephine, her nephews and their families, by her many friends, and by her Dominican sisters.

The funeral Mass will take place on Thursday, October 8 at 10:00 a.m. at the Dominican Sisters Center, 1520 Grand Avenue in San Rafael.  Following Mass, Sister Marie de Lourdes will be buried at St. Dominic Cemetery in Benicia.