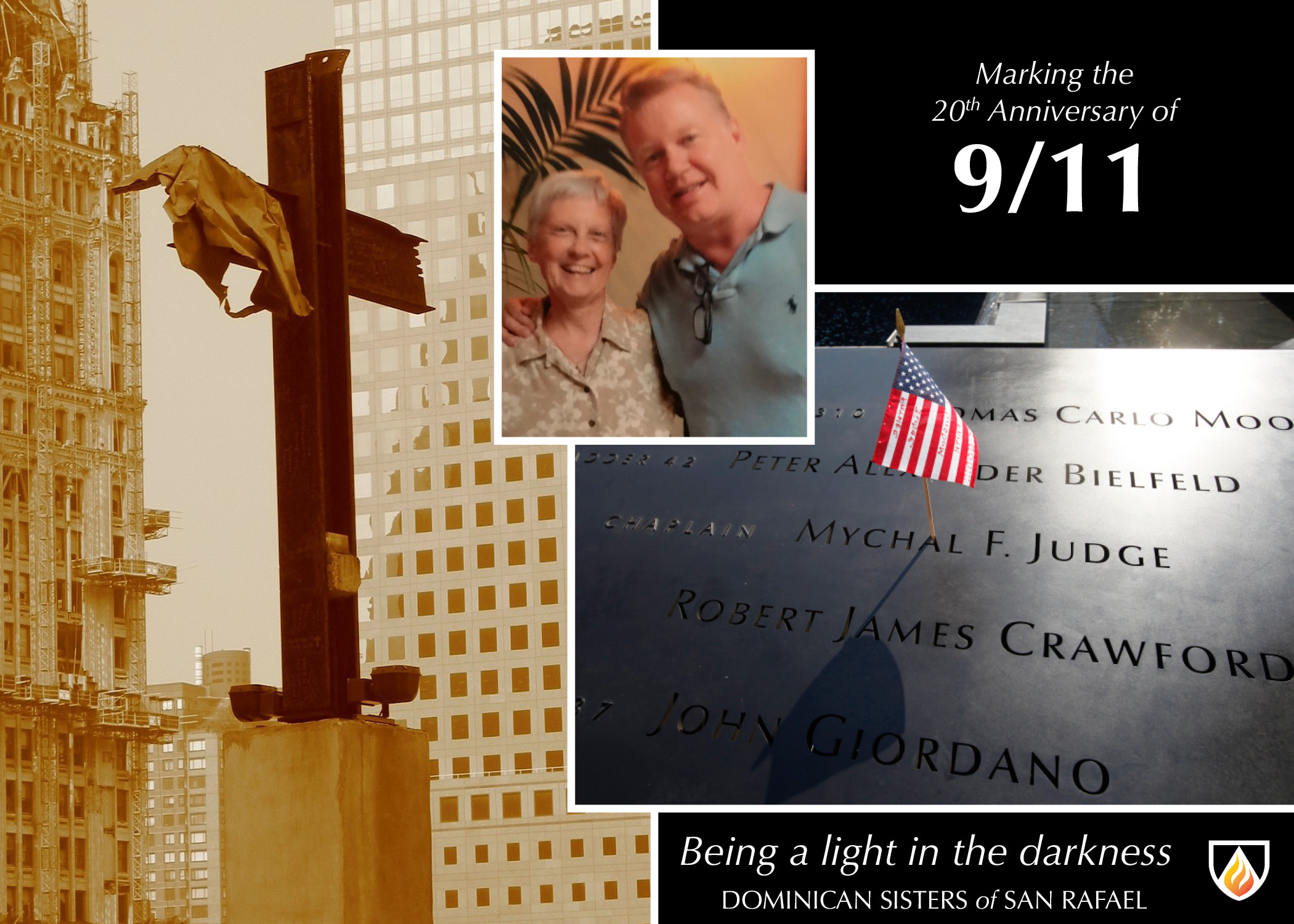 As we approach the 20th Anniversary of 9/11, plenty of people are no doubt swapping “where were you that day” stories. One such testament that stands out is a story about a story—an article in The Wall Street Journal to be precise. A story that would lead to an unexpected friendship—a bright spot in a dark time.

Being a light to others is a hallmark of the Dominican tradition and one that the Dominican Sisters of San Rafael espouse as they endeavor to bring the Gospel to bear on the headlines of the day; to bring the light of Christ into the lives of others.

On September 11, 2001, Sr. Diane Smith, OP was going about her morning preparing for her day in ministry at San Domenico School. As the news unfolded of the tragic events of that fateful day, she was one of the millions of viewers who witnessed the alarming twin towers and the emergence of the first victim of the World Trade Center disaster, Ground Zero victim number 00001—not a spectator who was witnessing the tragic event from a distance, not an employee working in one of the towers, not even a New York City firefighter risking his own life for the sake of others, but the Franciscan Friar and Chaplin of the New York City Fire Department, Father Mychal Judge.

A few weeks after viewing the cascading TV images of what was soon known as 9/11, Sister Diane picked up a magazine with an article which she was surprised to notice was written by an author with the same name (though his first name was spelled in the more common manner) as the “saint” whose memorial card now rests by her window.

The article written by Michael Judge, the News Editor of The Wall Street Journal’s editorial page, was a story about a heart-lifting happenstance that occurred a few nights after 9/11 when the author went into a bar filled with “a handful of New York’s bravest” who had just left a “12- hour search-and-rescue shift…tearing through the mountain of concrete and carnage where the towers once soared.” Mr. Judge told how after attending Fr. Mychal’s funeral, he went to a bar where he found New York’s bravest, mourning the loss of their chaplain, many having just finished a grueling shift. Mr. Judge wrote about his feelings towards what he described as undue attention and even admiration for sharing Fr. Mychal’s name. As Sister Diane read the article, she decided to send the journalist a note expressing how she was moved by his spirit-filled experience. A number of months had passed, but that note was received as a healing message—her words a blessing to Mr. Judge in a time of grief. He wrote back eventually, and the two have become friends, exchanging words ever since. About four years ago Michael and Sr. Diane met in person here in San Rafael. According to Mr. Judge, “We spoke of Father Judge, how his name and death, but most of all his life and devotion to those in need, brought us together.”

Through the simple act of sending a note, the light we share can be big or small. You never know when a small act of kindness can be the brightest light of all for someone, so make the effort to connect—to be there, to be a light for others. It is always worth it.

Read the article from 2001 here: ‘A Lot to Live Up To’ Out drinking with New York’s bravest, my name brought me undeserved honor” by Michael Judge | Sept. 24, 2001 | Wall Street Journal

Previous
Next
Preaching and Praying for Vocation

On Sunday, September 19, 2021, several Dominican Sisters of San Rafael joined other women religious for the Jubilee Celebration for the Archdiocese at Saint Pius Catholic Church Redwood City for a special Mass with Archbishop Cordileone presiding.