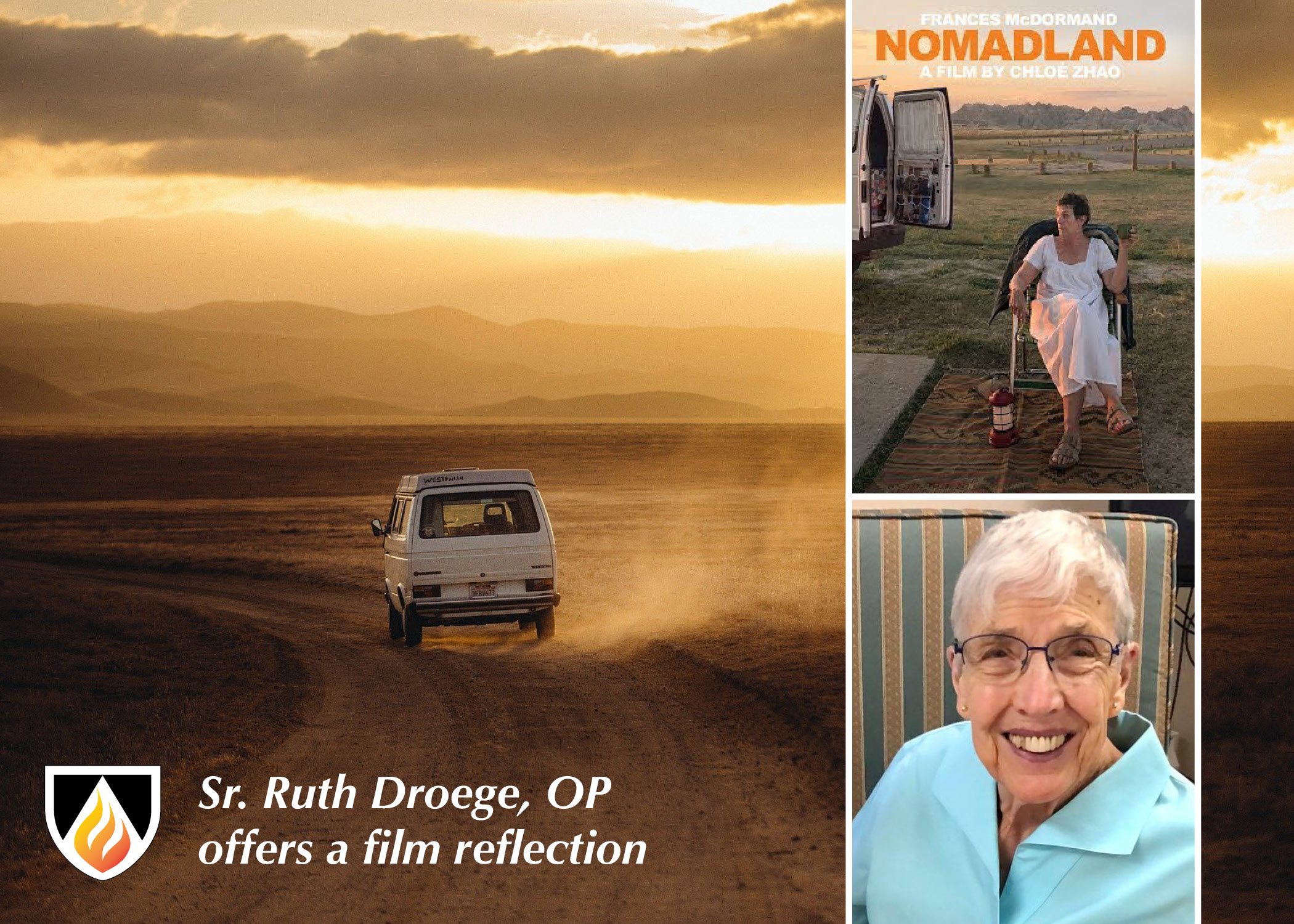 In 1961 Walker Percy published “The Movie Goer”, a novel that explored the theme that would surface in all his works: the human challenge of remaining alive while avoiding the everydayness, routine, and despair. To avoid being lost in the routine of everyday living, he emphasized the importance of “the search”. “To become aware of the possibility of the search is to become onto something. Not to become onto something is to be in despair.”

Nomadland won the 2021 Academy Award for Best Movie, starring Frances McDormand. Her name in the film is Fern.  She is portrayed as a van-dwelling, working nomad who leaves her hometown, Empire, Nevada, after her husband, Bo, dies and the sole industry closes down.

In reflecting on the movie, Nomadland, and on thinking about the importance of the “search” for avoiding despair in the routine of everyday living, it struck me that Fern clearly seemed to be on to “something.” Later in the movie, when Fern visits her sister, we learn that she was regarded as an adventurous person, different from others. Even after her marriage to Bo, the couple had built their home on a piece of land that provided a view of the distant snowcapped mountains. There were no fences or buildings to obstruct the view. We also learn, in the course of the movie, that Fern rejects the offer of Dave, a friend she has made, to live with him in the guest house on his son’s property. It seemed that “not being confined” was something Fern appealed to Fern.

Fern’s adventure begins after Bo dies. She rents space in a storage facility for her belongings and drives away, “houseless”, but not “homeless.” She had made a “home” for herself in the RV that trails behind her truck. Keeping in mind the importance of the “search”, I pondered was this just a story about people   displaced by the economic turndown or did Fern’s story convey something important for future survival and happiness? When you see the movie, you will formulate your own answer which may be different from mine. Different views increase understanding. It came to me that Fern’s journey would be meaningful for any person or group anxious about the future.

I asked myself how did Fern’s past life relate to the new life on which she was embarking? I began to get hints that she was holding on to the past in ways that were not always supportive. She had paid for the storage of her belongings that could not fit into the van. One pays for something one considers valuable. Fern valued the things she had stored. They had some connection to her past life that she is not ready to give up.

This connection becomes clearer when Fern takes a box containing the fine china her father had given as a gift on her graduation from high school with her even though she seems to realize they would not be useful on the road. When Dave, her friend, drops the box that holds the china, she speaks harshly to him, commanding him to stand aside while she carefully picks up the pieces. That night she patiently glues them together.

Fern was willing to work.  She had worked hard at managing the household for Bo and herself.  She also had been employed at USGypsum and worked part-time as a teacher. She was highly regarded by her students. One family even invites her to make her home with them. As accomplished as Fern is and however much Fern takes on the role of a self-sufficient woman, there were some things she needs to learn.

When Fern’s van blows a tire, she seeks out a nearby nomad named Swankie and asks for a ride into town to buy a spare. Swankie chastises Fern for not being prepared and invites her to learn more road survival skills. Fern takes a job at an Amazon fulfillment center through the winter. When the temperature drops, a co-worker invites her to visit a desert rendezvous in Arizona, organized by Bob Wells, which provides a support system and community for fellow nomads. At first, Fern refuses the invitation. After one night of bone-chilling cold, she gives in and accepts the offer. There Fern meets fellow nomads and learns basic survival skills.

There is one scene in the film where Fern appears to have visited a gypsy fortuneteller.  The gypsy, in addition to noting the independent streak in Fern’s palm, also notices the gold wedding band on Fern’s finger.  She asks if Fern is married.  Fern acknowledges that her husband is deceased and that she cannot bring herself to take off the ring. The gypsy advises her that love is circular, recurring, and never dies.  Though love can be the cause of painful grief, it can also, at other times, be a source of joy and support. Fern appears to be not entirely convinced.

Sitting around the campfire one night, Swankie shares that she once planned to end her life. She could not follow through with her suicidal plan because of her love for her two dogs.  A camp dog has been befriended by Fern.  When the owner is willing to gift Fern with the Dog for companionship, Fern gives the dog a last, affectionate pat before she drives away.

Toward the end of the film, Fern revisits the desert rendezvous organized by Bob Wells.  In the course of their conversation, Bob shares with her his feelings after his only son had taken his life.  Grief had paralyzed him. It took several years before he could feel anything more than despair. Only with great effort could he wrench his thoughts away from his loss and begin to think of others.  He resolved to organize a camp where people who were feeling disenfranchised by the downturn of the economy could hope and manage to rebuild their lives.

The film ends with Fern revisiting Empire. There she closes the storage facility and divests herself of what was stored there. She goes back to look at her house before she takes to the road again. Recalling the quotation from Walker Percy “not to be on to something is to be in despair”, I felt that Fern, through her varied encounters on the road, was “on to something.” We have the choice in our everyday experiences to grow in becoming aware of the possibilities these offers.

Fern’s heart has grown in its ability, in its freedom to love others, in the choices it makes to be open to the possibilities of changing the over-stressed need for independence, which concealed an underlying dependence, to be empathic and concerned for others. Courage to grow makes being and becoming possible for Fern.

Up to now, I have been viewing Fern’s journey through the eyes of a psychologist.  Is there more to “see”? I found that there is; however, what I “saw” related to Swankie, and only indirectly to Fern. Shortly before Swankie dies of Cancer, she is sitting around a campfire with Fern and other Nomads. She tells them about an experience that left her overcome with wonder and happiness, enough to last a lifetime.

One day, she had stopped by a cliff where hundreds of sparrows were nesting. The birds were soaring together above and below her. She herself felt that she was flying with them, freely, no longer burdened by everyday experience, somehow being outside of time. Will Fern have this “epiphany” of spirit? She was at the campfire that night and recalls it later on New Year’s Eve when she and other nomads are commemorating their companions who have passed on. She tosses a stone into the fire to remember Swankie.