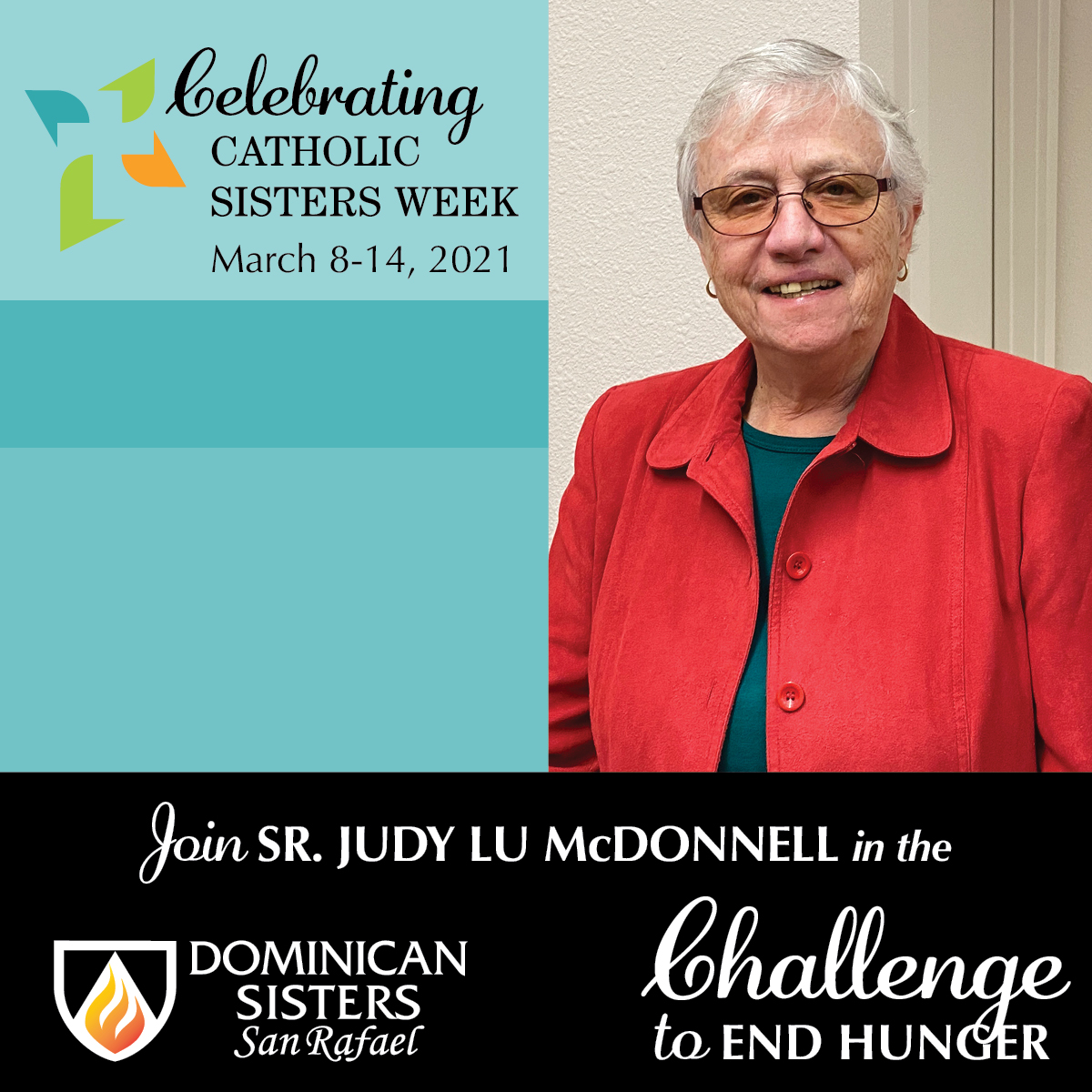 As a co-promoter of justice for the congregation, Sister Judy Lu McDonnell’s daily ministry is right at the core of the mission of the Dominican Sisters of San Rafael—to bring the Gospel to bear on the critical issues of our times. Today, during Catholic Sisters Week the Sisters are highlighting issues related to food insecurity in particular, but as Sister Judy Lu can attest, “hearing the cry of the poor” has prompted bold action for many decades. She notes, “In addition to our ministries in health and education for the past 170 years, and hearing the cry of the poor, we Sisters have also actively embraced social justice issues in the U.S. and Latin America.”

Sister Judy Lu recalls in the 1980s, the congregation taking a public stance on sanctuary for Salvadoran and Guatemalan refugees, later expanding that commitment to include immigration reform and solidarity with migrants seeking asylum, sanctuary, and family unification. The Sisters provided sanctuary in their Mother House for two families from Central America.

Being a voice for the voiceless and advocating for justice both near and far is an important ministry, and the Sisters walk the walk. “We have sponsored Sisters in mission full time in Mexico, Peru, Bolivia, and Brazil. Sisters have also volunteered in special projects such as the Nuns Build to assist families rebuilding homes in New Orleans after Hurricane Katrina, and one Sister accompanied immigrants on the Immigrant Workers Freedom Ride across country by bus to Washington, DC, to raise awareness about labor abuses against immigrants and to lobby for justice. More recently, Sisters have volunteered to assist refugees arriving in El Paso, Texas from Central America and other countries in uniting with family and friends in the U.S. while processing their asylum claims.

The Sisters have supported School of Americas Watch (SOAWATCH) and SHARE-El Salvador both financially and serving as members of delegations seeking justice for the murders of the Four Church Women and the Six Jesuits, their housekeeper, and her daughter in El Salvador, as well as the many massacres and other atrocities committed by corrupt Central American regimes.

On a weekly basis, the Sisters distribute a Justice Update and highlight at least one item a week through social media using the hashtag #justiceOPportunity Thursday.  These posts encourage people to take an action on a justice issue by calling elected officials, signing petitions, attending a rally, viewing a video, or writing letters to indicated individuals or organizations. Addressing issues related to food insecurity, particularly heightened by the COVID-19 pandemic, is an ongoing social justice issue for which the Sisters will continue to advocate.

Sr. Judy Lu McDonnell’s story is part of our 2021 Catholic Sisters Week series, a time during which we are participating in a Challenge to End Hunger in collaboration with other congregations. We aim to inspire our friends and neighbors to lend their support in any way they can to help end hunger, not just during Catholic Sisters Week, but throughout the year. #catholicsistersweek #changingtheworld #celebratingtraditions