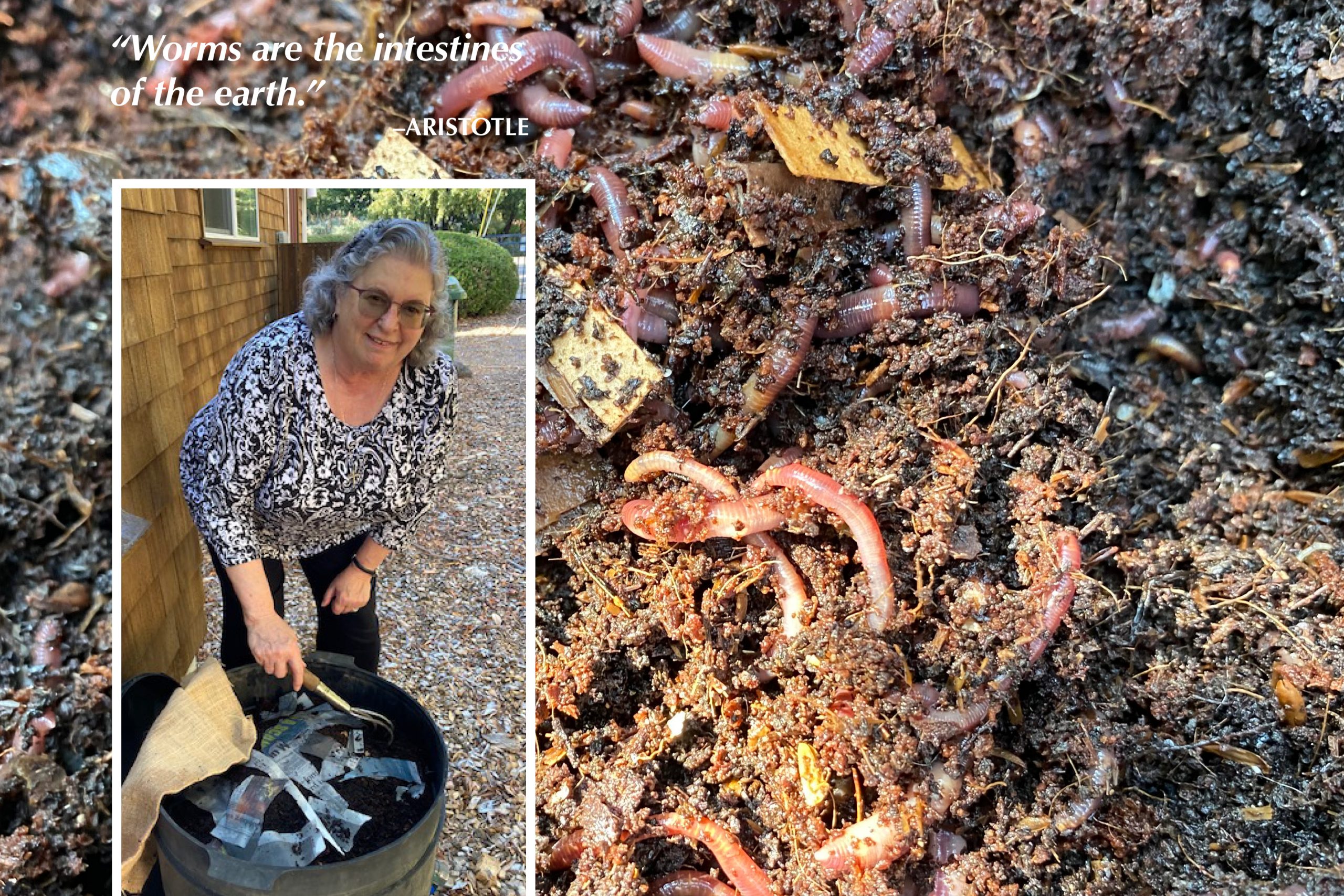 Sr. Mary Kieffer who serves as the Administrator of Our Lady of Lourdes Convent in San Rafael and chairs the congregation’s Earth Charter Implementation Committee takes the call to care for Mother Earth to heart—or, to the worms! September 1 marks the beginning of the 2020 Season of Creation, and Sister Mary ushers in this special time by digging in to worm composting—welcoming three pounds of red wrigglers to a newly relocated worm tower. Enthusiastically she shared, “this composting project speaks to our congregation’s commitment to sustainability and honoring all of creation. Aristotle stated that ‘worms are the intestines of the earth.’  In this case, the product of the worms feeding habits benefits both Earth and humankind.”

Sr. Mary is eager to brush up on her skills in the area of vermicomposting (composting with worms), something she first learned about while living in community as a novice at San Domenico School, long known for their garden and sustainability program. Sister Carla Kovack (now Prioress) was living at San Domenico at the time and had just returned from a sabbatical where she had studied vermicomposting. Sr. Carla was taken with the concept and introduced the practice to San Domenico, where it still thrives today. Sr. Mary learned from her time with Sister Carla at SD and shared, “I later went to live in other communities in California and Nevada, but I never forgot the benefits and fun of vermicomposting. When I returned to San Rafael and learned that the worm towers that Sr. Carla started were still at San Domenico, I asked if I may move a tower to our Jane d’Aza convent to start a local worm farm to feed our rose and vegetable gardens.”

She went on to explain, “vermicompost is the product of decomposition utilizing various species of worms (in this case, red wigglers), to create a mixture of decomposing vegetable or food waste and bedding materials. Worms eat green waste e.g., lettuce, melons, coffee grounds, and most fruit. The worm waste, called castings, is rich in nutrients that one can put in gardens as fertilizer.”

To start a worm tower, use bedding such as coconut coir, peat moss, or compost. Then add pieces of wet cardboard and/or newspaper. Once established, the worms will welcome and eagerly eat your green waste. The liquid of the tower drops into a reservoir at the bottom of the tower. This is called worm tea and can be siphoned off to use on houseplants. Then watch your plants thrive.

Sr. Mary is looking forward to tending to the worm tower and energizing the gardens through her efforts. How might you find ways to tend to the needs of the earth, especially during this Season of Creation?