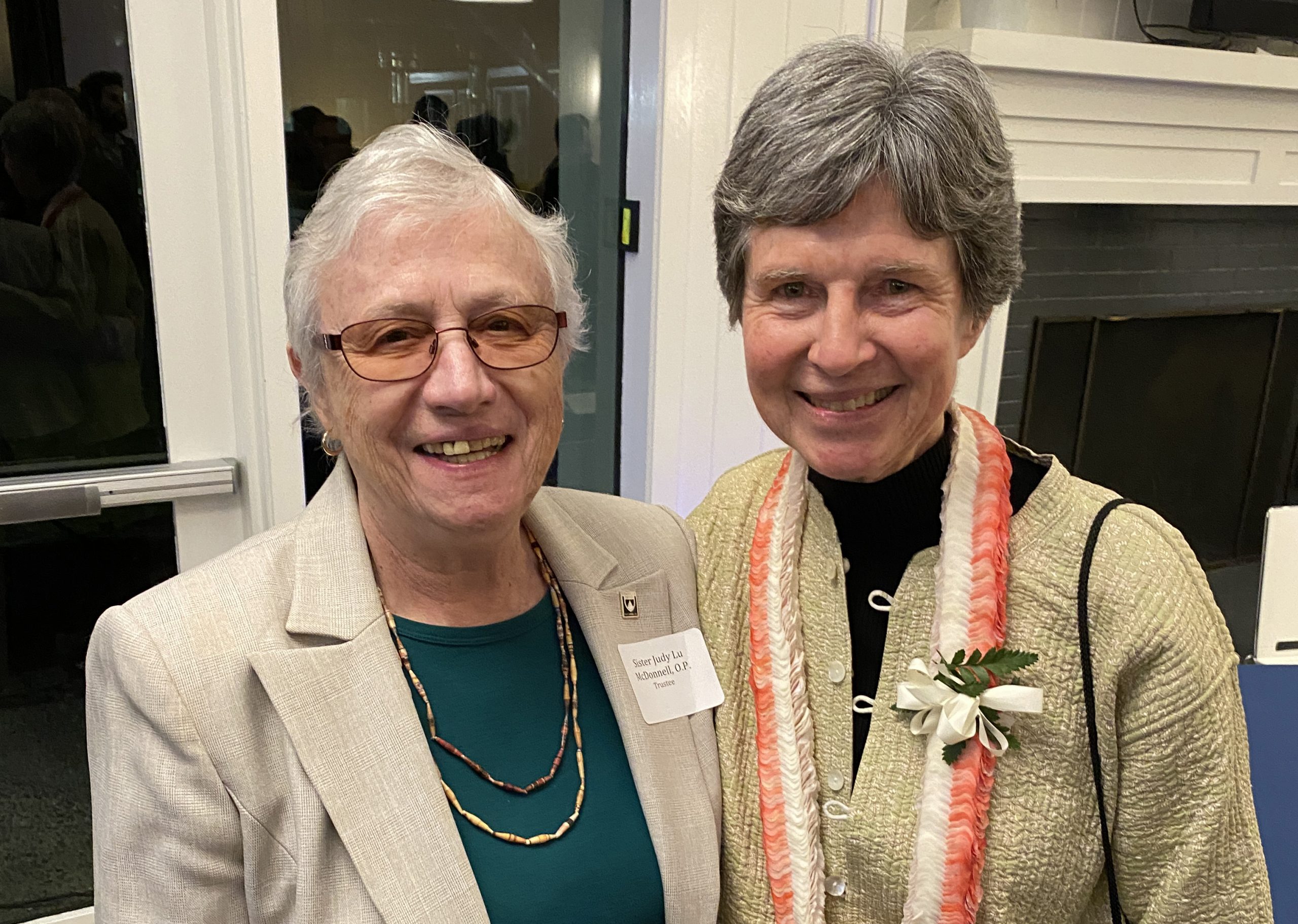 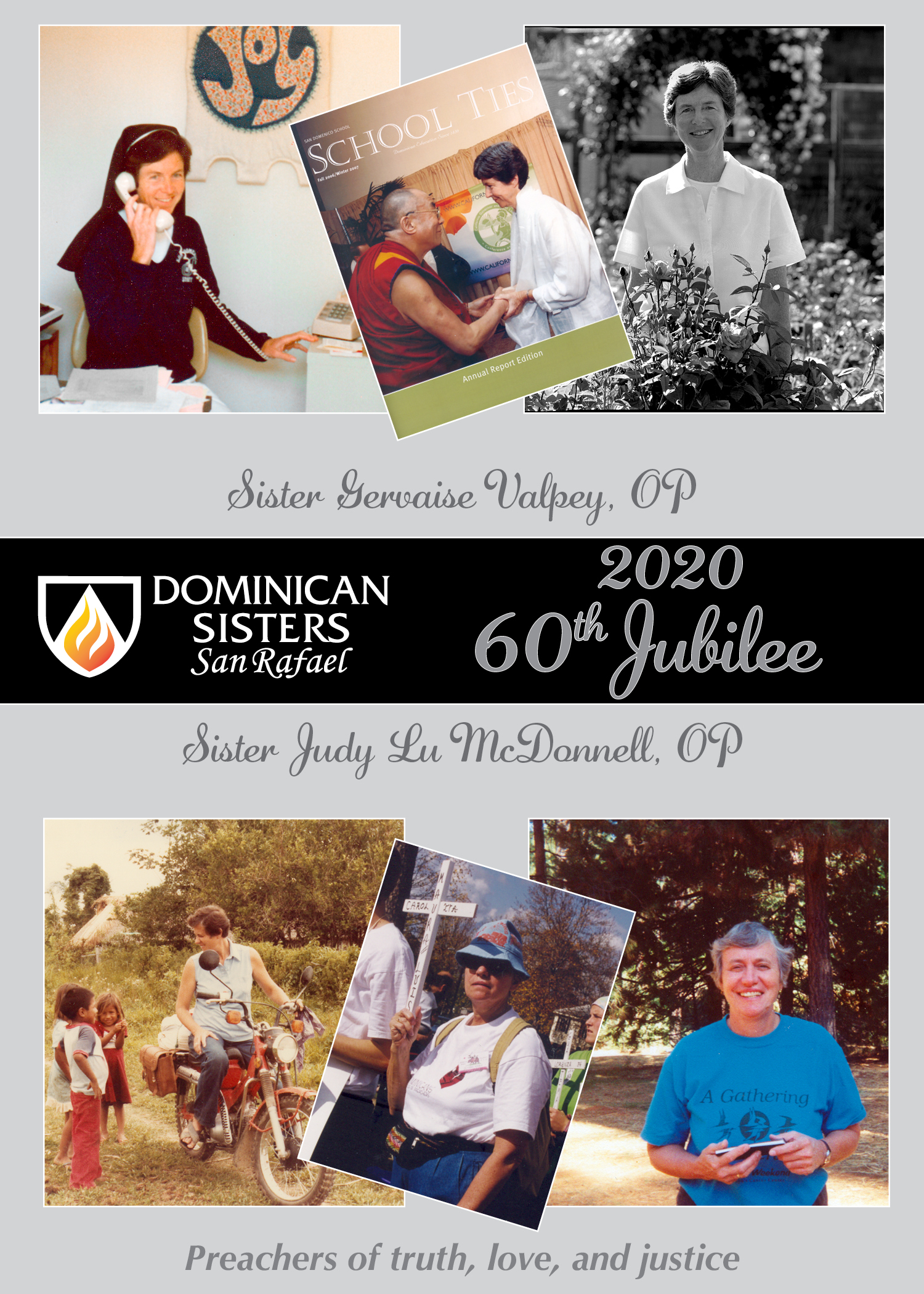 In 2020, the Dominican Sisters of San Rafael honor two sisters on their 60th Jubilee. These two former schoolmates grew up in Stockton, CA, graduated high school together, and entered the convent on the same day! Sister Gervaise Valpey, OP and Sister Judy Lu McDonnell, OP continue to shine their light in a world very much in need. While their Jubilee Mass originally slated for July 18, 2020, was not able to happen as planned due to the COVID-19 pandemic, we wish to honor them by sharing their stories virtually. Sisters Gervaise and Judy Lu will join in with the 2021 Jubilarians next summer when we can hopefully gather and enjoy one grand celebration!

As a way to virtually honor these two remarkable women, we share their stories. 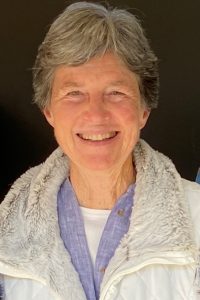 As a curious and life-long learner, consummate teacher, and seeker of truth, Sr. Gervaise Valpey, OP models the rewards that come from really listening to one’s self, reflecting about the world and one’s role within it, and fostering meaningful relationships with others. Sustained by her faith, inspired by the teachings of Jesus, and blessed with what she refers to as much opportunity, Sister Gervaise bears witness to and marvels in the connectedness of things—goodness in people, beauty in nature, connection to God and to science. Now in her sixtieth jubilee year as a Dominican Sister of San Rafael, Sister Gervaise reflects on her journey—one that has been full of grace.

Born and raised in Stockton and the product of a Dominican education, Sister Gervaise has spent the last sixty years primarily in the ministry of education. From being a dorm sister and teaching 4th grade at Domincan Convent Lower School on the San Rafael campus, to joining the 1965 relocation to San Domenico at the end of Butterfield Road in San Anselmo, one might say Sister Gervaise loves to build—programs, buildings, coalitions, committees. She would be the first to tell you that the rewards of any of these efforts lie in the lasting relationships created.

Guided by the Holy Spirit and crediting many mentors along the way, Sister’s journey has been about saying “yes” and responding to needs that arose around her. Whether it was repurposing underutilized dorm space for an early education program or securing its funding and the appropriate model of instruction for young students, Sister has an innovative spirit and an inspiring willingness to try. Grateful for the Dominican value of interdependence, she confidently walks in the footsteps of St. Dominic, and like him, her preaching is by her life.

As her role at San Domenico shifted more to leadership in the form of Upper School Principal—a position once held by a dear friend and mentor, Sr. Maurice Powers—and then ultimately to Head of School, Sister’s continual study of and reflection on her place in the world and the connectedness to all God’s creation, led her to deeper explorations on the topic of sustainability. Compelled also by the teaching and learning experiences, she visited and grew inspired by places like Genesis Farm, Integral Urban House in Berkeley, the Farallon’s Institute, and ultimately met UC Berkeley professor Sim Van der Ryn, former state architect and a world leader in the field of sustainable architecture. He worked with Sister Gervaise and faculty to lay the foundation for a sustainability program at San Domenico—thus, the Garden of Hope was born in 1994. For Sister Gervaise the garden and sustainability program are a source of pride, and she is nourished by observing the myriad lessons learned by students in the garden. “The program is continually evolving and adapting to the needs of the students. Students in grades pre-K-12 are each learning as they grow and develop about the cycles of life, death, and resurrection, if you will, and applying those lessons to their own lives. Engaging students in the study of our local ecosystem teaches many lessons—patience and waiting for your seed to grow into a seedling, and so on. Seeing the students translate their learning to the larger community gives such hope for the future.”

Reflecting today on the people, the opportunities, and the inspirations along the way, Sister Gervaise looks toward the future. Acknowledging some correlations between her memories of the post-Vatican II climate for women religious and ensuing radical changes and our current global coronavirus pandemic, Sister ponders what opportunities lie ahead as we forge into a new normal. “What might Church look like? What might our congregation look like? What might school look like?” She recalls what the mystic scholar Fr. Thomas Berry, whom she met years ago at a Santa Sabina Center program says, “we are not a collection of objects, we are a communion of subjects, and we are all one.” She wonders, “How are we going to grasp that?”

For Sister Gervaise, the answer starts with love. “Love for others. Love for our Earth. Love for all people. Loving them enough to work toward justice for all people. There is such inequality today—we need to learn how to work with people most in need—really see them. I pray that after this pandemic that our eyes are opened wider.”

Emerging from this 2020 pandemic, Sister Gervaise should feel very much at home in building mode. It is time to create a new—to take the lessons learned, the essence of what defines the Dominican Sisters of San Rafael as preachers of truth, love, and justice, and search for new ways to be light to others. Sister Gervaise is ready to say “yes” to the opportunity and move where the Spirit takes her. 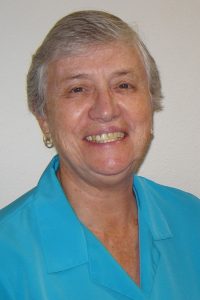 With an independent spirit, an aptitude for science, and a curiosity about the world, Sr. Judy Lu McDonnell spent her formative years in Stockton, living out a childhood that would shape her future in ways she couldn’t have imagined. Influences were all around her. The Dominican Sisters of San Rafael served as her teachers. The only girl in a family of boys, young Judy possessed a nurturing instinct toward others always tutoring and volunteering. She attended daily mass and found inspiration in a Sunday talk given by a medical missionary and imagined a future as a Medical Missionary doctor. In her budding spirituality, she embraced a devotion to Mary and the rosary. It was in high school and at the urging of a close friend that she began to feel called to religious life. She sought spiritual counsel, prayed, and ultimately joined the Dominican Sisters of San Rafael adopting the ring motto “By the grace of God I am what I am.” (1 Corinthians, 15:10). Indeed, God’s grace has led Sister Judy Lu through her sixty years as a Sister.

Initially missioned to teach high school science and religion, Sister Judy Lu fueled her curiosity by earning an advanced degree. It was during that time she began to hear the words “ecology” and “sustainability” and the interconnectedness of things. She shifted from chemistry to biology and delved into the life sciences. She brought her enthusiasm to her Vallejo classroom, eventually teaching a new science peppered with the writings of the spiritual mystic Teilhard de Chardin. The 60s brought about much change in society and for Sister Judy Lu.

Citing safety concerns in the science lab, she was one of the first in the congregation to adopt a modified, shorter habit. She witnessed teenagers drifting from the church and sought to reach them spiritually in new ways—have you ever been to a guitar mass? “I delved deeper into theology and spirituality…something was stirring during my time in Vallejo because of the youth and how they were looking at church differently.” Those stirrings led to more reading and reflection. “I started reading about liberation theology and learning about the third world. I read about Maryknoll Missionaries and was feeling called to explore more.”

After more than a decade as a teacher and with the blessing of the Council, Sister Judy Lu was off to the jungles of Bolivia during the politically tumultuous 80s. “I fell in love with the place, finished language school, and landed in a colony with the Quechua, an indigenous group of farmers who spoke their own dialect.” She lived in a hut on her own for 8 years as the other Missionaries sought more urban opportunities. “It was very rustic. I got around by bicycle through the mud or hitching rides on trucks. It wasn’t for everyone, but I loved every minute of it. I learned my Spanish by teaching the Quechua to read and write in Spanish.” She developed a passion for literacy that stays with her today. Applying her teaching skills and science background she worked with the women to educate them in health and nutrition. She motored around the jungle to neighboring villages delivering lessons and love, easily making life-long friends along the way. Spurred by a desire to raise consciousness about women’s rights in a richly patriarchal society, Sister Judy Lu pushed literacy agendas, helped women organize in and among villages, planned empowering speaker events, and planted the seeds of feminist theology—creating the Center for the Promotion of Women in the late 80s, which is thriving today as the Rebellious Collective. Continuing to grow in her studies, intrigued by a budding eco-feminism movement, she was then missioned to Brazil to create something similar. After a total of eighteen years in the southern hemisphere, she was called back to California.

Fast forward to the late 90s in an era of social security and immigration reform, she was called to her hometown of Stockton to assess growing needs in the Laotian and Latino immigrant communities, given her language skills and experience abroad. After completing the necessary training, she co-created with Lyn Kirkconnell (who had served as a missionary with her in South America) the Transcultural Health Outreach Program at Catholic Charities in Stockton that led to the creation of the Legal Immigration Program of the Diocese of Stockton to address the immigration needs of countless individuals.

Since 2008, Sister Judy Lu has served as the Co-Promoter of Justice, Peace, and Care of Creation within the congregation.  “We work to inform, to provide a faith-based lens of judgment, and to promote actions for justice locally, nationally, and internationally.” Sister Judy Lu never stops learning or advocating for others. Every day brings new challenges, and she is quick to study, reflect, and act, bringing the Dominican values to light in a world in need. She thinks toward the future and to new ways of helping, assisting, empowering, educating, and how to encourage the talent pool within the congregation to bring more light to the world—especially during the current pandemic.

Earnest in her justice efforts to this day and involved in more committees and coalitions as there are Zoom/Skype hours in the day, Sister Judy Lu is fueled by her spirituality and a desire to empower others. As she reflects back on what she calls “the unexpected gifts” along the way, she feels contentment. “I have been able to be open, my stubbornness got me through anything. I am so surprised that so many opportunities came along that I could move right in and out of—all these opportunities that I never could have imagined. Nothing like what I was thinking when I entered the convent at age 17.” Sister Judy Lu lives and breathes what it is to have God’s grace flow through us—there is no knowing what is around the next turn. Just lean in, and enjoy the ride!