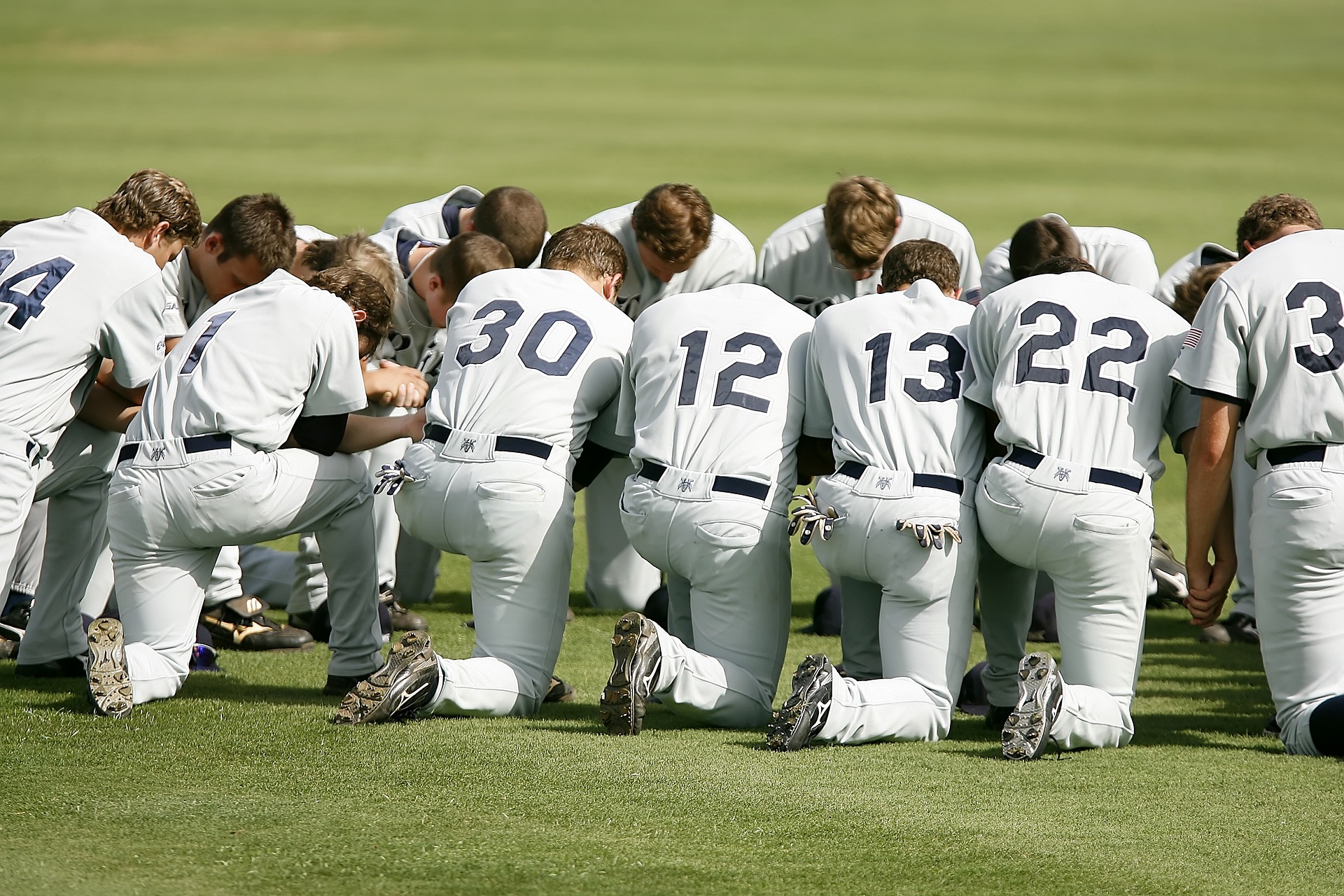 One of my friends once commented that she thought more prayers were said in sports arenas by fans and some of the players than in churches.  Which brings up the question, “Does God hear the prayers from sports arena?”  Even more importantly, “Does God hear our prayer?” Well, I guess there are a lot of ways to answer those questions.  You probably have your own answers, but if it were up to me, I’d say, “Yes,” “No,” and “I don’t know.”

Like you, I would say “Yes” because we have prayed and our prayers have been answered. No matter who we are or how we feel about ourselves God has answered our prayer. But I think we’d also have to say “No” because our prayers are not always answered the way we desire. We have prayed for some of our friends and family members to get jobs and they’re still unemployed. We have prayed for people who are trapped by drugs, alcohol or in unsafe relationships and they haven’t found a way out of their destructive behaviors or emotional prisons. We have prayed for ourselves and yet we continue to fall into the same patterns of self-centeredness, prejudice, jealousy and/or a lack of hope. All of which leads us wondering why some of our prayers are not answered.  So, I guess we also would have to say “We don’t know.”  We don’t know why some of our prayers are answered and some of them are not. But what we do know is that often God doesn’t work in the ways we expect.  We also know that God’s mercy breaks through our narrow expectations in surprising ways. Over the years we come to know that the answer to prayer is not victory in sports, a new car, or even an immediate cure of a dreaded disease. The answer to our prayers is deeper and more lasting. The answer is God: a God who surprises us and often writes straight with crooked lines (1).

Prayer is not a magical formula. It’s not a quick fix that will solve every problem. It doesn’t allow us to control our situation.  In a very real way, it keeps us from the original sin of thinking we are gods. Whether we pray the rosary every day; attend daily Mass, pray while working in the garden or sitting quietly at home reflecting on a scripture passage, we begin to realize that prayer is a relationship. It takes time and attention.  It means showing up each day and being faithful to the practices we have chosen.

My mother died when she was 94 years old.  Like any good parent, she continued to teach me to the end of her life.  Even though her health was failing, she became a strong image of God for me because like God I didn’t have to do anything special to please her. When I went to visit her, I didn’t have to bring her flowers or read her a story. Maybe on a hot day, I might bring her a cold beer or some fresh-cut fruit. But if I forgot to bring her something that was alright too, because the most important thing for her was that I showed up. That was enough to make her day. And if this showing up was enough for my mother then how much more must God be pleased with us by our consistent and faithful prayer patterns: our showing up.

There’s a story that Yo-Yo Ma tells of his father who was a well-known violinist. His father lived in Paris during World War II at the time of the German occupation of Paris.  Yo-Yo Ma’s father, in order to restore his sanity in the midst of the violence he experienced each day, would memorize a Bach violin concerto. Then at night during the blackout time he would play the piece for memory in the dark. Yo-Yo Ma said, “My father wasn’t practicing.  He was contemplating. He was alone with his soul praying to God in the darkness of the night and united in spirit with those who also were suffering.”

I guess we could say that in the best of times prayer is like that. Even though we can’t see God and those for whom we pray, we trust God’s abiding presence.  Private prayer also lays the foundation for our community prayer.  Prayer is not just about God and us.  It’s a community event.

The Gospel says, “Ask, seek, knock.”  Show up. Be persistent.  Curiously enough, these directions come after the parable about a friend who goes to a neighbor’s house in the middle of the night to ask for bread.  A strange and very inconvenient time to request bread, but the one who is knocking at the door needs food for an unexpected out of town guest who has arrived and is hungry.  Because of the persistence of the friend who is knocking at the neighbor’s door, the man inside the house wakes up, opens the door and gives the neighbor the bread he requests.

The parables that Jesus tells are not fairy tales, but stories about God.  They suggest an image of what God is like.  Because of that, the parables often surprise us and shift our usual way of thinking about our experiences and what God is asking of us. The parables, because they are stories, can be understood from different points of view.   For example, the master in some parables is not an image of God, just as the man who is knocking at the door of a friend’s house asking for bread in this parable doesn’t necessarily have to be a metaphor for us, beating down the door in prayer asking God to hear our prayers.  Rather what if we thought of the neighbor pounding on the door as an image, a metaphor, for God.  God who pounds at the doors of our consciousness to wake us up to the needs of our neighbors.  A God who pounds on the door so we will respond to the cries of our neighbors who are in need: those who are hungry for bread, hungry for justice and safe lodging.

Thinking of the parable in this way, we can hear these God voices knocking at our doors daily.  The Pope just got back from Madagascar and Mauritius where he spoke boldly condemning corruption and deceit. His words to government officials called for integrity, justice, and truthfulness, as well as the care of those who live in poverty.  As the Pope’s words echoed around the world, I’m sure they were a commentary on other governing officials both in his homeland and in ours.  The Pope also encouraged those in need to be in solidarity with one another so as not to lose hope.

Another voice knocking at our doors to awaken us is that of Greta Thunberg.  Even though she is a teenager, this Swedish prophet’s voice has rallied thousands of teens and older people.  Her bold speech at the Climate Conference with the refrain, “How dare you,” still echoes in my prayers each day.  Hopefully, her voice and the pounding of the demonstrators will awaken the consciences of the leaders of our nation and others to protect the sacredness of all creation.

The immigration door has also been addressed.  Many of the bishops’ voices have been absent in the conversations concerning the human rights violations at our southern borders.  It‘s a curious silence since so many of those who are fleeing from violence in their own countries are Catholic.  Perhaps that is why Cardinal Tobin from the Newark Diocese of New Jersey, who led a march from St. Mary’s Cathedral to the Federal Building, has been so appreciated.

We have a lot of God voices waking us up these days.  And isn’t that why we pray the rosary, attend Mass as often as possible, read and study scripture?  These practices deepen our connections with one another and our trust in the God who writes straight with crooked lines.  As a friend of mine said, “God’s voice has awakened us and once our eyes are opened, we can’t close them to the evil around us and go back to sleep.  We must ask for the wisdom and courage to know how to respond.”

“Stories Seldom Heard” is a monthly article written by Sister Patricia Bruno, OP.  Sister is a Dominican Sister of San Rafael, California.  This service is offered to the Christian community to enrich one’s personal and spiritual life.  The articles can be used for individual or group reflection.

Special thanks to Mary Ellen Green and Maria Hetherton who have helped in editing this article.