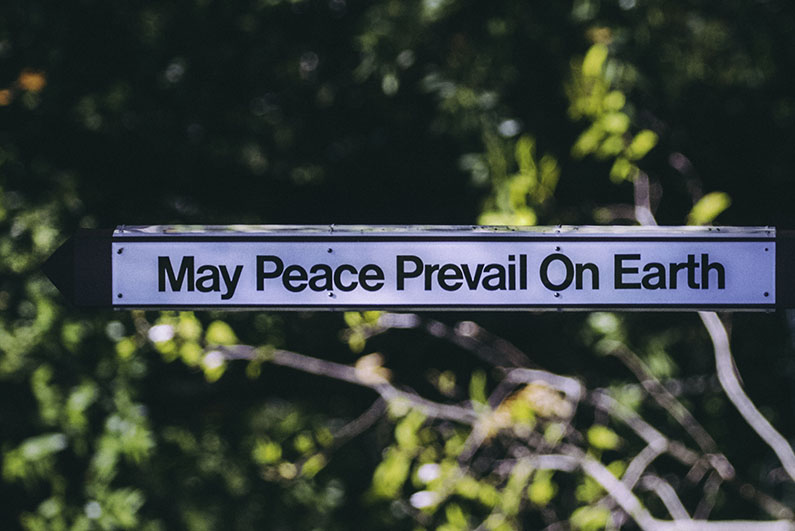 Welcome to Stories Seldom Heard.  I would like to especially welcome the new members of the Dominican Laity and those who attended the Men’s Retreat, Irving, Texas.

This month’s article will complete our reflections on the “official” Beatitudes, but in truth, the words “blessed are you” appear many times in other places in Scripture.

This last Beatitude is not very comforting. “Blessed are those who are persecuted for the sake of righteousness.  Happy are you when people abuse you and persecute you and speak all kinds of calumny against you on my account.”  This Beatitude not only offers us a blessing, but also a warning.  When we choose to follow God’s law and reflect Jesus’ attitudes and actions in our lives, we will meet resistance and often persecution.  Loving God with our whole heart, mind, soul and strength; and our neighbor as ourselves, is not a platitude.  It is a commandment which we are called to follow as closely as we can.   It is the work of a lifetime.

We hear this call to righteousness not only through the actions of Jesus, but also through the voice of the Hebrew prophets, as well as our modern ordinary and extraordinary prophets.  However, those who live just lives often experience resistance, rejection, and persecution.  Some rejection will come from established religious and political institutions or strangers we will never meet.  Some criticism might come from friends or even family members.  But also, there might be a resistance that comes from within ourselves.  It’s hard when we know our words and actions will lead to criticism and rejection.  Dealing with conflict is hard.  In order to address it, we must be honest with ourselves about our motives and actions.  We must be students of the world, well-read and well-informed.   If we haven’t done our homework which involves study, prayer, conversation, discernment and consistent actions on behalf of justice laced with compassion, those who disagree with us will not feel compelled to respond in positive ways. If we truly “walk the talk,” authority and the powerful will find it hard to reject our insights and demands for justice.

There’s a story about Dom Helder Camara, who died in Recife, Brazil, on August 27, 1999.  He is one of the great leaders of the 20th century. Like most bishops, he was a politician who had strong relationships with the rich and powerful.  He also had the rare gift of appealing to all groups, including students, revolutionaries and the press.  When he started programs to feed the hungry, he could feel the approval of people both in high places and in daily life.  He said, “They call me a saint, but when I ask why the poor are hungry, they call me a communist.”  Questioning Brazil’s unjust laws brought personal threats, persecution and calumny.  Yet, none of these discouraged him.  Then an even more painful fate fell on him as he saw friends and colleagues – priests, catechists, and lay people – repeatedly imprisoned, tortured, or killed because of their association with him.

One night a frightened family sought Dom Helder.  One of their family members had been arrested and was being tortured in the police barracks.  The bishop immediately telephoned the chief of police: “This is Dom Helder.  You are holding my brother.”  The policeman, surprised, stuttered: “Your brother, Eminence?”  “Yes, despite our different names, we are sons of the same Father.”  The chief made all sorts of excuses, but finally ordered the release of the man, brother of the archbishop, son of the same Father.  That’s how Dom Helder was a Gospel man, simple and direct, consistent, just and prayerful.

When Cardinal Arns of Sao Paulo was asked by Pope Paul VI, “What can you tell me about Dom Helder?” The Cardinal responded, “Dom Helder is a poet, a mystic and a missionary.  As a poet he knows how to say things and the people understand what he says.  As a mystic, he prays and lives his whole life with God.  But he is also a great missionary, a man who brings the ideas of God to the hearts of people.  I have no doubt that he is the greatest man of the Church in Brazil”.

Don Helder was an extraordinary person. He heard the gospel and put it into practice in his situation.  Sometimes, however, when we think about those who are persecuted and are willing to give their lives for justice, we forget those people whom we know living close by.

We hear of many righteous people in our daily lives who are willing to take the consequences of their righteous actions. Two women, I know, who began a community organizing project in Pittsburg, CA, received an anonymous phone call threatening their lives if they continued working on community issues in the area.  These women were very concerned, of course, but continued organizing the grassroots people around issues of affordable housing, improved public services, exposing drug activities and encouraging low income residents to attend city council meetings.  Perhaps because they had high visibility and community support, they had been spared any more threats.  The organizing project has survived over eighteen years and the residents are still a vital part of that community at-risk.  But there was a different ending for another woman in a neighboring town who worked to eliminate the use of drugs by teenagers.  She was not as fortunate.  One Sunday morning she walked out of her house to pick up the newspaper.  A car drove by.  She was shot and died on her front lawn.  The church was not large enough for the people who attended her funeral.  But the words “blessed”, “righteous”, “just”, “loving” could be heard while we stood on the sidewalk. “Blessed are those who are persecuted for the sake of righteousness.”

A few years ago, Daniel Berrigan, SJ, spoke at Manresa Retreat Center on Staten Island, NY, an event honoring Dorothy Day.  Daniel’s message that night, for those present and for us today, was “Persevere.”  He quoted Isaiah, Chapter 2, “They shall beat their swords into plowshares,” as he reflected on Day’s long-range impact on him as well as on the wider world.  “Berrigan noted Day’s cautionary wisdom that “we may never see the good outcome of the good we do, but do it anyway.’” He went on to say, “You have no right to tie yourself in knots because you want to know the outcome of what you are doing….Let it go. Let it go into history. Let it go into Christ. Let it go into generations. Let it go into the children. Play it and pray it well” (1).

Often we are blinded to our own cultural and religious prejudices.  Blindness is serious.  Many of us know the threat of physical blindness.  It can be terrifying and life-changing.  Many activities depend on their ability to see.  Yet, people who are blind often claim to see better than many of us who have sight.  Helen Keller spoke about her intuition and her ability to see a reality that often we sighted people miss.  “I can see…in what you call the dark. I can see a God-made world not a man-made world.”

What is this God-made world that Helen and we, as Jesus’ disciples, are asked to see?  The beatitudes capture Jesus’ vision and direct our attention to a different way of judging our experiences.  God’s kindom will come, Jesus says, when we act for the sake of righteousness even at the risk of misunderstandings and vulnerability.  Now, that’s a hard road to walk since most of us don’t like to be misquoted, let alone misunderstood.  Rejection and vulnerability are not easy.

I have a copy of an old Baptist hymn that a friend gave me a long time ago.  The subtitle is, “I wouldn’t take the bread and wine if I didn’t wash feet.”  It’s a great reminder of our call to discipleship, our quest for righteousness and our promise to serve anyone in need despite the cost.  It’s a reminder too of the dignity of each person and of what Christ meant by family.  “Sistering” and “brothering” goes way beyond our blood ties, religious traditions and political/national boundaries.  The hymn says,

“They kneel on the slanting floor…to soothe the sourness/bound in each other’s journeys….This is how they prepare/ for the Lord’s Supper,/ singing and carrying a towel/ and a basin of water,…Jesus started it:  He washed feet/ after Magdalene dried his ankles/ with her hair….If I wash thee not,/ thou hast no part of me.”/ All servants, they bathe/ flesh warped to its balance/ God of the rootwad,/ Lord of the bucket in the well.” (2)

No wonder Dorothy Day says the greatest challenge in our day is to bring about a revolution of the heart, a revolution which has to start with each one of us.  Pope Francis also echoes these words in The Joy of the Gospel.  “The son of God by becoming flesh summons us to a revolution of tenderness (P. 51). It’s a dangerous revolution, for sure. This revolution is one in which many people do not want to engage; resistance, rejection, persecution make for uncomfortable companions.  But the full images of our Easter Triduum haven’t faded.  Life, death and resurrection!

“Stories Seldom Heard” is a monthly article written by Sister Patricia Bruno, O.P.  Sister is a Dominican Sister of San Rafael, California.  This service is offered to the Christian community to enrich one’s personal and spiritual life.  The articles can be used for individual or group reflection.